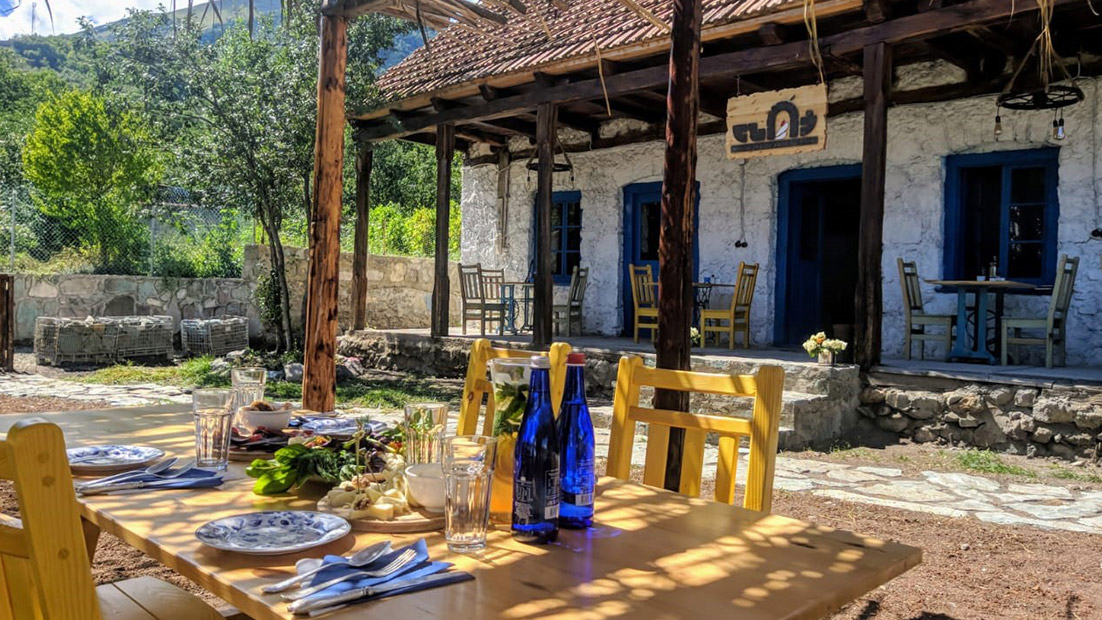 Since 2021 Gosh village has its first gastro-yard situated in a centennial mansion. The initiator of the project is Gevorg Gasparyan, the founder of “Arevi” agency initially engaged in the promotion of adventure tourism in Armenia. “Arevi” also has its hotel located near Yeghegis river in Vayots Dzor and now they are planning to put their efforts into the development of Tavush region.

Gevorg has visited Gosh several times, as his hiking and touristic routes run through the Tavush region, while starting an initiative in one of the villages has always been at the back of his mind. Eventually, “Arevi” purchased an old house near Goshavank monastery and renovated it - preserving its style and identity. Quite interestingly, during the construction works they discovered two fireplaces; hence the name of the place “Hnots” which means fireplace in Armenian.

Initially, Gevorg was nurturing the idea of a hotel project, but then he came across this house which was on sale and he couldn’t help buying it. This is how the gastro-yard project turned into reality. Currently, it operates as a restaurant, but it’s not a standard place to have a bite. They chose to name the place a gastro-yard because, with the amplification of the touristic flows, they plan on serving traditional Armenian cuisine including dishes particular to the Tavush region. They plan to build a bakery to go further and offer gastro experiences to its visitors; here tourists will have a chance to make their own Tavush puri bread and lavash.

“The locals are really fond of the project. However, we discovered that for many years the area has never realized its touristic potential. The official statistics illustrate that before the pandemic around 500-700 thousand tourists visited Goshavanq and the local areas every year but there are no touristic units and initiatives in the village at all,” says Gevorg, “No hotels, no restaurants; there are only the souvenir stands near the monastery which sell the same items you can buy at any tourist site in Armenia. Thus, previously, the tourism sectors didn’t resemble a stable source of income for the locals.” In his opinion, “Hnots” gastro-yard will be a good precedent for the villagers to start similar initiatives in their own yards and houses.

When renovating the building, they hired all construction employees from among the villagers; moreover, five of them are to join the main staff of the Hnots as soon as it opens officially. Several other villagers will supply the gastro-yard with various goods, for example, forest mushrooms, berries, homemade compost, etc. Additionally, in the frame of another project, in cooperation with CARD, they’ve chosen five farmers to provide them with different seedlings of the plants that are used while cooking at the gastro-yard. The CARD will instruct these farmers on growing these plants, while “Hnots” gastro-yard on its turn will procure these goods from these farmers.

This story was prepared by the Regional Post Magazine, date September 10,2020